The Visit App is a mobile app that allows users to scan attendees into an event, which then pushes data to our Engage platform. In late 2019 Gecko decided to redesign and rebuild the Visit App. The previous app had been built on old technology, was running into performance issues and just generally unstable - leading to a lack of confidence with our customers.

During development, the pandemic hit, putting the project on hold, after all, what use was an on-campus app when everything was shut down? As things slowly started to open up, the Visit App was released.

All sounds great, so what’s the problem?

The feedback on the newly released app was hugely positive, however, there was one snag. To minimise the potential spread of Covid, most institutions wanted a low touch point event check in flow, meaning attendees could scan themselves into the event rather than an on the day student ambassador.

"If we can build a means of self check in, customers won’t be forced to look elsewhere for event check in solutions. Leading to both customer satisfaction with the app and retention of customers."

We wanted to add a feature to the new app that would enable the front facing camera on mobile and tablet devices, this way the institution staff could set up their devices on stands and let attendees scan themselves in.

To get things started, myself, the Product Manager and the Lead Engineer run a 3 amigos session. During this session I raised a couple of concerns…

1 - The app contains personal data, how do we prevent an attendee from exiting the camera and tampering with the app?

We solved this issue by enabling a passcode during activation of Kiosk Mode. Users would navigate to settings, toggle on Kiosk Mode, set the passcode and then head to the event they wished to scan. 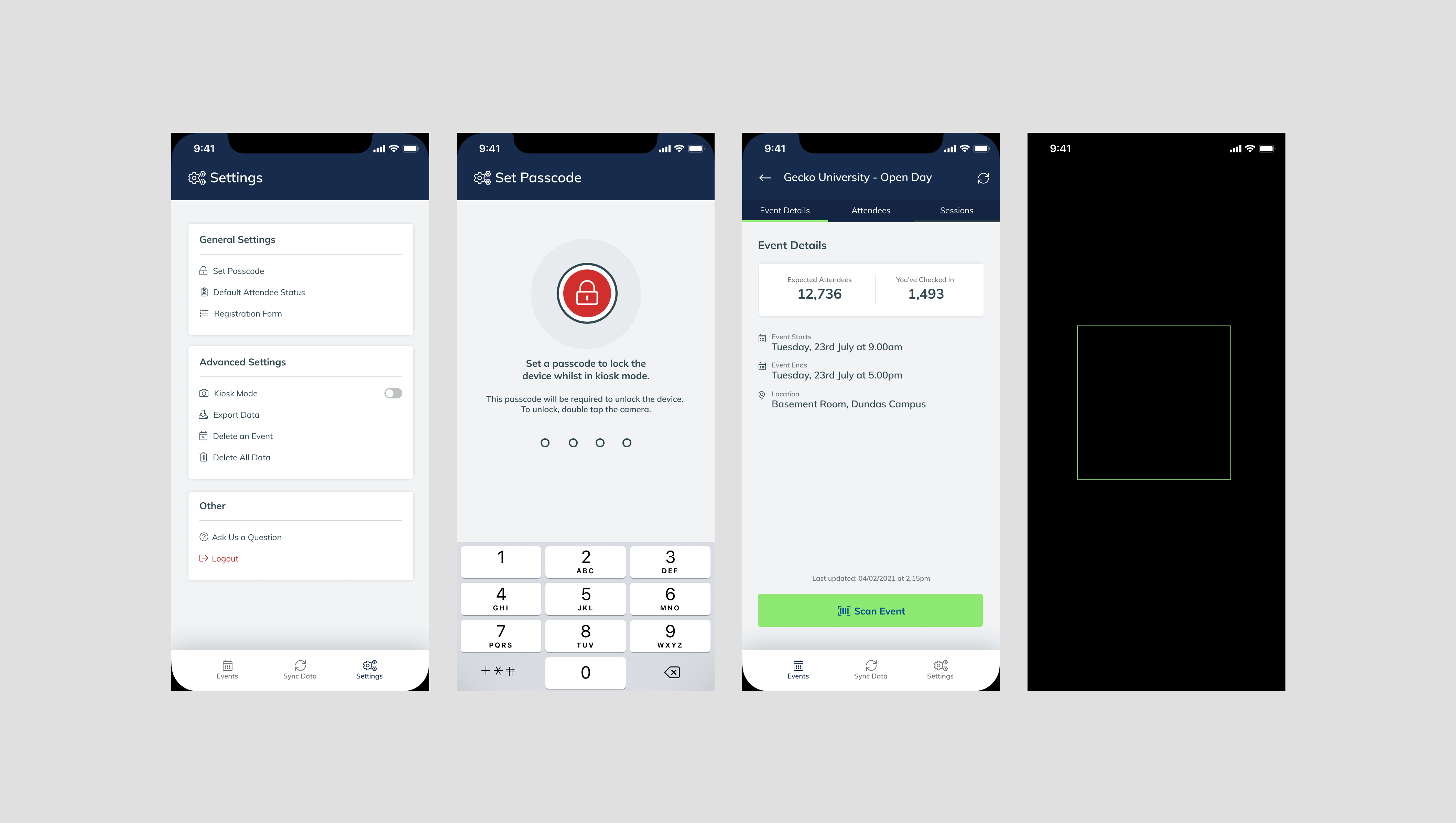 The steps to set up the passcode.

2 - With the camera activated, how do you exit?

We initially wanted to remove all UI from the camera to have a clear as possible screen. This included the flash, switch between front and back camera etc., the typical camera functions you’d expect. We also didn’t want an exit button on the camera as we felt this may be confusing to the person scanning in - was the exit button for them to press?

We explored the possibility of using gestures to exit the camera, but feared this would be too complex a solution, and the app admin would need training on how to use it. We did like the gesture idea though and didn’t want to fully dismiss it. We opted for a double tap reveal of the controls, as it was a simple process and something that can be mentioned during passcode set up.

On double tap the exit button is displayed, which then in turn reveals the passcode.

How to exit Kiosk Mode after double tapping the screen.

Due to our Agile working practices, we were able to shift focus and ship this new feature in a single sprint. In person events were becoming more and more “normal” and we got the new feature into the hands of customers quickly.

This quick turnaround ensured that no customers were at risk of churn by looking at other providers, and the feature is still heavily used today, in fact, the majority of Visit App users are now using Kiosk Mode over the standard scanning mode, freeing up on the day resources.